Skylanders: Ring of Heroes
The Cave of Gold is a challenge area in Skylanders: Ring of Heroes. It is a vault of riches that Golden Queen kept even more hidden than her original lair in The Golden Temple. It is guarded by Cyclopses, with some that have absorbed gold onto themselves not unlike the villainous statue and become Non-Elemental, stronger and harder to hit.

At the end of ever floor, the Doom Raider herself attacks in her giant form, using two turrets of different elements. This dungeon only allows three entries a day, possibly because the Queen can prevent further raids for a time; however, even in failed missions, the player can leave with great amounts of gold compared to regular Adventure mode.

As of December 3, 2020, the revamped version of the game removed Cave of Gold, but due to player feedback, it was reinstated three months later, with a single level and randomly generated entries. The cave's defender has infinite health, but will drop extra gold every time she's knocked down. Later, the Cave of Gold added the elimination feature along with three floors.

A wave with fully guilded enemies. 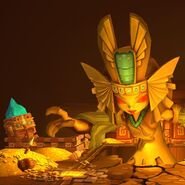 The Cave's icon on the old Challenges screen.

Background of the Cave of Gold area

Second Floor of the Cave of Gold.