Captain Grimslobber is the main antagonist of Gill Grunt and the Curse of the Fish Master. He is the captain of the Fearsome Fang, a feared pirate ship, and his crew were the toughest bunch of bucaneers no one would want to meet. 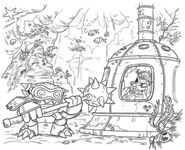 Retrieved from "https://skylanders.fandom.com/wiki/Captain_Grimslobber?oldid=79815"
Community content is available under CC-BY-SA unless otherwise noted.