“Aye, t'was long ago when those blasted rustbuckets locked me away in that cursed realm of endless nothing. But now, as I reclaim me own giant sword and free me giant fleet, I solemnly swear to plunder all of Skylands, right down to their blasted skivvies!”
—Captain Frigtbeard

Captain Frightbeard is a giant seadog pirate who is the main antagonist in the 3DS version of Skylanders: Giants. He owns a fearsome pirate ship called The Phantom Tide.

Return of the Dragon KIng

Frigthtbeard somehow managed to once again escape the Chest of Exile and recruited a group of Cyclops Pirates as his crew. He and his pirates were terrorizng a river in an unknown part of Skylands where they would ambush any unfortunate ships with the use of a Spell Punk's magic to go undetected. Eventually Frightbeard heard a rumor of a ship holding gold and attacked the vessel Gurglefin, Cali and Flynn were on while enroute to the Wilikin Village to deliver toys. While his crew searched the ship, they unlocked a trap door where the Skylanders, Spyro, Jet-Vac, Wallop, Spy Rise and Weeruptor sprang out from. Undeterred by the surprise attack, Frightbeard ordered his crew to attack the Skylanders.

It was soon revealed by Wallop that the ship holding gold was actually a rumor spread by Spy Rise to lure Captain Frightbeard and his crew so the Skylanders can take him down. Spyro the Dragon confronted Frightbeard himself and blew a blast of flames on the seadog to defeat him right there and then. However the flames didn't harm Frightbeard, confusing Spyro. Frightbeard laughed at the dragon's attempt to attack and moved in for the kill. Spyro was quickly saved by Spy Rise, and Frightbeard was then knocked out by Wallop, ending the battle.

Captain Frightbeard appeared as a playable villain racer in Racing Mode. His signature vehicle is The Lil' Phantom Tide. 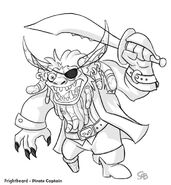 The first sketch of Frightbeard from Skylanders Giants by Chris Bromby

Retrieved from "https://skylanders.fandom.com/wiki/Captain_Frightbeard?oldid=122976"
Community content is available under CC-BY-SA unless otherwise noted.