“Ye beat me once, ye hornswoggle, but now ye toughest challenge lies dead ahead. If ye want her back... ye'll need to beat my POOP DECK!”
—Captain Dreadbeard

Captain Dreadbeard is the seadog captain of the Pirates who occupy Plunder Island. He and his pirates took over the Coconut Islands in the console versions of Skylanders: Spyro's Adventure. He is known as the most villainous and scurviest of all the pirate buccaneers of Skylands, but his one and only weakness is his love for pirate card games.

Captain Dreadbeard took over the Coconut Islands to seek out the town's treasure. His crew played card games with the residents of the islands (in which they cheated to win) and eventually took all of them as prisoners. After the Skylander arrived and defeated Dreadbeard's crew in their card games, the Captain himself challenged the Skylander to his card game and claimed that he would leave the Coconut Islands if he lost.

The Skylanders won the card game, and Captain Dreadbeard fled onto the ship, but revealed that he had captured Jess LeGrand along with the town's treasure he stole. The Captain fled back to Plunder Island with Jess in tow, but the Skylanders gave chase, destroying his island's defenses, and challenging Dreadbeard once again for Jess' freedom. The Skylanders succeeded, winning Captain Dreadbeard's respect, and the evil seadog vowed that they haven't heard the last of him, before jumping into the sea to escape.

In Skylanders: Giants, he is the boss of Cutthroat Carnival. However, after clearing the chapter, he appears in the game room on Flynn's Ship, and you can play him at Skystones anytime from then on.

In Skylanders: Trap Team, Captain Dreadbeard is stationed at the Game Room in Skylanders Academy where you can play Skystones Smash with him. He is also involved in the Skaletones Showdown.

Captain Dreadbeard is one of the bosses of the Water Realm, under Chill Bill's command. He has the ability to steal cards and Gear from enemies. 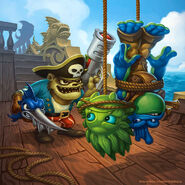