Calliope is a fairy who appeared in the Return of the Dragon King story arc, playing a key role.

Calliope is a fairy who simply seeks to be reunited with her lost family. However, her frantic search would cause her to commit terrible deeds. She is a fan of the Skylanders, feeling regretful after playing a role in stealing their powers and helping Malefor. Calliope doesn't stand for the sight of Skylands being threatened and would do whatever it takes to redeem herself and fix the trouble she had caused.

Calliope possess the ability of flight like all other fairies. She was shown to be able to steal the powers of Skylanders just by touching them, and then bestow the power inside of a crystal which empowers whoever wields it.

While searching for her lost family, Calliope was approached by the Undead Dragon King Malefor, who offered to help find her loved ones if Calliope did what he commanded.[1] The fairy agreed to the deal, and followed his command to steal the powers of Spyro, Cynder and Hex, unaware of the dark intentions Malefor had in store.

Calliope, while carrying out Malefor's orders, was in the clutches of a tentacle beast within a swamp when Spyro came to the rescue after hearing the fairy's call for help. Unknown to Spyro, she stole his powers from him into a crystal she wore while thanking the dragon for saving her. Calliope later attended Hex's charity magic show in Woodburrow and was picked as a volunteer for a magic act. While performing the card trick, the fairy managed to touch Hex, stealing her powers before the magic trick amazed both Calliope and the audience.

She was one of the eager fans who wanted to meet the Undead Skylander, Cynder, after her battle in the Rumbletown Arena. As the two shook hands, Calliope stole Cynder's powers without her knowledge and the two parted ways. Although she would never forget the experience of meeting Cynder, Calliope didn't feel right about what she did to Spyro, Cynder and Hex, but knew that she didn't have a choice. She flew off, hoping that Malefor would finally let her go.

After completing her objective in stealing the powers from Spyro, Cynder and Hex, Calliope returned to the Cadaverous Crypts. However the three Skylanders, including Wallop, tracked her down and chased after Calliope in hot pursuit through the caves. She came upon a stone where Malefor urged her to shatter the crystal upon it to release the power she had stolen. Calliope hesitated, as shattering the crystal would render Spyro, Cynder and Hex helpless and she didn't feel right about it, despite knowing about the deal she had struck with the Undead Dragon King. Malefor furiously ordered her to do so, and Calliope obeyed reluctantly, smashing the crystal onto the stone and allowing the evil dragon to absorb the power, reviving himself. Calliope looked on in horror as Malefor immediately used his renewed fire ability to easily overwhelm Spyro, Cynder, Hex and Wallop, knocking them unconscious.

Under another order, Calliope created a crystal for Malefor to use to drain the powers of Skylanders, much like the one she used on Spyro, Cynder and Hex. When the evil dragon departed to carry out his latest plan, Calliope was placed in charge to tend to the unconscious Skylanders who were imprisoned. The fairy was met with animosity from Wallop and Cynder when they awakened, despite her attempts to explain the reason behind her actions. Calliope soon explained to the Skylanders Malefor's true motive and still attempted to provide the Skylanders with food. When they explained their experiences with Malefor and how the fairy can still make amends, Calliope couldn't bring herself to help the Skylanders, feeling ashamed of her actions. She flew away into the caves in tears, unaware that the Skylanders would soon be freed by Flynn and Mags.

When Calliope returned, she discovered that the Skylanders had escaped without her aid. The fairy recalled Spyro's words and how the Skylanders didn't blame her for her actions, which helped her ultimately realize that by helping Malefor, she had become a monster just like him. The fairy ventured to the Skylanders Academy where she, along with the other spectators, witnessed Spyro, Cynder, Hex and Wallop battling Malefor. She was discovered in the crowd by Persephone, who scolded Calliope for her actions and persuaded her that it wasn't too late to do the right thing. It was then that Calliope ultimately redeemed herself by telling Spyro Malefor's weakpoint in his armor that held the crystal he used to drain the Skylanders of their powers.

After the Skylanders damaged his armor, destroyed the crystal and regained their powers and full strength, Malefor turned his attention to Calliope and demanded how she would ever find her family without his help. The fairy was reassured that she would gain help from the Skylanders and her friends despite what she had done. As Malefor was forcefully pulled over the edge of the island by Flynn's damaged Dread-Yacht, he frantically pleaded to Calliope to help him, only for her to refuse, not wanting to see Malefor ever again. The fairy, along with the Skylanders, then watched as Malefor plummeted to the abyss, convinced that the evil dragon is truly gone. Apologetic for her actions, Calliope was comforted by Master Eon that without her help, Malefor wouldn't have been defeated. The Skylanders Academy would be rebuilt and that there would be plenty of help in the form of the Skylanders willing to assist Calliope in finding her family.

When Malefor offered to help Calliope find her lost family in exchange for doing whatever he wanted, she agreed to the deal without a second thought. The time between the two soon grew uneasy as Malefor forced Calliope to steal the powers of Spyro, Cynder and Hex, which she felt wasn't right. Despite what she was doing, Calliope was willing to fulfill the terrible deeds simply because she wanted Malefor to be able to find her family like he promised. She later realized how far Malefor went upon his resurrection, and that by helping him, Calliope had become a monster just like the evil dragon. She ultimately turned against him and redeemed herself by pointing out Malefor's weakness. Calliope only wanted to never see Malefor again, no matter what he promised, and she received her wish when Malefor was dragged into the abyss by the Dread-Yacht.

Calliope recognizes Spyro as the most famous Skylander of all. When Malefor returned, she is apologetic towards Spyro, Cynder, Hex and Wallop for what happened. 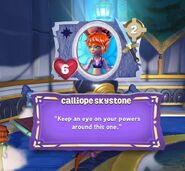 Retrieved from "https://skylanders.fandom.com/wiki/Calliope?oldid=122893"
Community content is available under CC-BY-SA unless otherwise noted.