“So you're ready to try a Heroic Challenge huh? Well, let me warn you right off the bat, they're TOUGH. Like me. Want to give one a try?”
—Cali

Cali is a Mabu adventurer and one of the main supporting characters in the Skylanders series. After you rescue her in Perilous Pastures, she will offer you Heroic Challenges for each Skylander.

Cali is one of Skylands' most daring explorers. She describes herself as being tough and laughs in the face of danger. She's shown to be rather smart and quick to make the right decisions in perilous situations, but she is also shown to have a very caring and even somewhat motherly side to her. She is never afraid of being captured by her enemies, which is lucky as it seems to happen quite a lot.[1] Despite this, as revealed in Prism Break and Sunburn's Heroic Challenges, she hates spiders. If you're looking for adventure, Cali is the natural choice as a trainer to prepare young Skylanders for future missions.

One of Skylands' greatest explorers, Cali originally set out to map every single island before she was forced to give up after the number 4,367. She settled in Eon's Citadel where she helped train the Skylanders.[2]

Cali was among many who attended the Annual Storm Titan Games to see Lightning Rod in action with two other Skylanders, Pop Fizz and Drobot. When Flynn's balloon was accidentally struck down by Rod's hammer, the Skylanders quickly saved the day, and Cali was filled in with the details about the Mask of Power and why Kaos was after its fragments. The female Mabu heard that the Air segement to the Mask of Power had seemingly taken on the form of a Land Whale, which Cali revealed to have seen long ago at a Cyclops city called Tempest Towers, where the Cyclops Queen kept her collection of never-before-seen animals.

Due to her knowledge to where Tempest Towers laid, Kaos kidnapped Cali with the help of a disguised Drow Witch, and the Skylanders quickly gave chase to save her. During their pursuit through the Sea of Storms, the Skylanders managed to beat Kaos to the Tempest Towers first thanks to Drobot's Afterburners. Cali was soon rescued by Flynn and Double Trouble, and they gained control over Kaos's Drow zeppelin to get the other Skylanders off the island. It was later revealed that the Air segment to the Mask of Power wasn't the Land Whale, but the Cyclops Queen's tower that held her animal collection.

Cali was captured by the Drow and held prisoner at the edge of Perilous Pastures. She was later freed by the Skylanders and returned to the Ruins, where she volunteered to help the Skylanders by offering them Heroic Challenges to train them. After Kaos's defeat, Cali began to tolerate Flynn more when he complained about the ramblings of the captive Kaos, realizing that she found something she and Flynn agree on. She then remarked to Flynn that he was okay when he's not saying something ridiculous (which he oblivously agrees). She also appeared at the party being held after the game is completed, where she will encourage you to try and beat all her Heroics.

Cali joined Flynn on a quest to stop Kaos from ruling Skylands with an army of Arkeyans. On board the Dread-Yacht, she took part in helping the Skylander with Heroic Challenges and later helped out by planting explosives in Troll Home Security for the Skylander to get through the stronghold.

In the 3DS version, Cali helps the Skylander in their fight to stop Captain Frightbeard, interrupting her exploration of Sand Dune Seas.

Cali made a brief cameo at the beginning of the game, trying to tell Flynn something while he was on vacation at the Cloudbreak Islands. However Flynn cut her off when he desperately tried to retrieve his volcano hat that was blown away by the wind.

While the residents of Boom Town was celebrating Flynn's 'heroism', the lord of the underworld, Count Moneybone, kidnapped Cali and turned her into one of the undead to be his bride before beginning his evil plot to rule Skylands. Cali was freed and returned to normal when Moneybone was defeated and his plan foiled. However the undead transformation has left a side-effect on Cali as she has been known to howl at nonexistent moon every now and then.[2]

Cali participated in the opening to the Skylanders Academy when Flynn's Dread-Yacht piloted by the Minis was soaring out of control. When Tessa managed to land the Dread-Yacht with its passengers intact, the group discovered that Flynn had walked overboard with Chopper having gone after him. Cali and Tessa decided to go and find Flynn, coming upong the real Weeruptor along the way. They eventually found Flynn and Chopper being attacked by a squadron of Troll Bombers and saved them with the help of Weeruptor and Wildfire. When Flynn claimed that Cali and Tessa were worried about him, the two girls glanced away sheepishly, but denied it by saying that they would save any of their friends if they were in trouble.

By the time Cali and others arrived back at the Academy, Kaos was being driven out by Food Fight, saving the Minis from danger.

Cali, along with Hugo and Flynn, participated in the grand opening of the Skylanders Academy when a large fragment of Cloudcracker Prison crashed into the nearby Soda Springs. After the Skylanders went with Buzz to the Springs, and defeated both Sheep Creep and The Gulper, Cali assisted the Skylanders on their quest by piloting Flynn's ship when he became too injured after a later mission. When navigating through The Golden Desert with the Skylanders, Cali was turned to a gold statue and kidnapped by the Golden Queen. She was eventually rescued after the Skylanders defeated the Queen's minions in her desert arena. Fortunately, Mags was able to restore Cali to normal by using her De-Goldifier, and Cali soon accompanied the Skylanders to help them take down the Golden Queen within her lair.

Cali, Flynn and Gurglefin were on enroute to the Wilikin Village by ship when they were ambushed by Captain Frightbeard and his crew of Cyclopses. Anticipating the ambush, the Skylanders were hidden below deck and attacked the pirates when they were searching around for treasure. The Skylanders defeated Frightbeard and his crew, but not before noticing that there was something wrong with Spyro's powers.

When the Skylanders, Spyro, Cynder, Hex and Wallop were fighting a revived Malefor, Cali was among the spectators who witnessed the battle on an nearby island. Wheellock noted how Cali had seen the Skylanders overcome impossible odds compared to Malefor, and the female Mabu confirmed this, firmly believing that the Skylanders wouldn't give up.

Cali took part in the last day of school party at the Skylanders Academy. Three months later, she accompanied a few Skylanders and Sharpfin in search of Kaos, who escaped from his Traptanium prison. They came under attack by Dark Drow at Kaos' abandoned fortress and were nearly consumed by a rift. Although injured during the escape, Cali stayed behind at the Academy to help protect it from whatever attack Kaos may throw at them. During the battle for the school, Cali, Flynn, and Hugo were captured and brought to Count Moneybone's prison ship.

Imprisoned onboard Moneybone's vessel, Hugo was able to create a portal for the Portal Master to transport their Skylanders to Skylands. With the help of the Skylanders and their vehicles, Cali and the other prisoners were able to escape and reach the Skylanders Academy safely. Afterwards, she helped the Skylanders in their fight against Kaos, The Darkness and The Sky Eater.

Cali is annoyed mostly with Flynn and his big ego. However, in some cases, she warms up to him, as shown when she found out that they both have something they agree on about Kaos and when Flynn announced that he would be turning over a new leaf by being more humble. Despite him not really sticking to this promise, throughout the games she's shown to still get along fine with him, though she can still be annoyed by his mannerisms, or lack thereof. In Mini But Mighty, Cali has feelings for Flynn, but doesn't admit it.

Oddly, in Skylanders: Ring of Heroes is affectionate and encouraging to the Portal Master, helping them get used to Skylands and the many facilities Master Eon arranged for them. 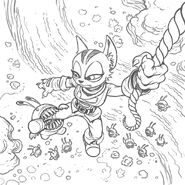 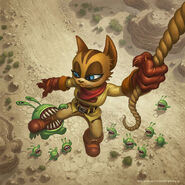 Cali, Glumshanks and Flynn travel toward the Vault of the Ancients

Retrieved from "https://skylanders.fandom.com/wiki/Cali?oldid=120186"
Community content is available under CC-BY-SA unless otherwise noted.