“See what the buzz is all about.”
—Villain Vault

Buzzer Beak is a miniature bird who is one of the Air villains in Skylanders: Trap Team. He had set up an ambush on an isolated island around Know-It-All Island by using a Legendary Treasure to lure the Skylanders into his trap. In the end, Buzzer Beak, along with other Buzzer Beaks, Plant Warriors, and Tussle Sprouts, were defeated and he was trapped. In Skylanders: Battlecast, he attempts to stop the Skylanders from reaching Dreamcatcher at the Air Realm.

Buzzer Beak can extend his helicopter blades to attack enemies around him and divebomb into enemies with his behind.

In Skylanders: Battlecast, he can also charge at enemies with the spike at the top of his hat, and summon a gale of spikes and blades. Buzzer Beak is dangerous in that he can repeatedly damage enemies with his character cards and ability. 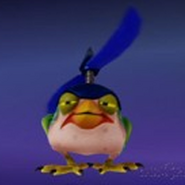 Evolved Buzzer Beak
Add a photo to this gallery

Retrieved from "https://skylanders.fandom.com/wiki/Buzzer_Beak_(villain)?oldid=121596"
Community content is available under CC-BY-SA unless otherwise noted.