Bruno is one of the default Portal Masters in Skylanders: Ring of Heroes. He is the Troublemaker Clockmaker.

If you make a promise to Bruno at Skylands, especially relating to time, you’ll have to be very determined. Bruno is so good at handling clock parts that he can handle time itself. If you decided to meet Bruno at 2 o'’clock, Bruno will show up at 3 o’clock and doesn’t care to hurry at all. The person who waited will get angry and ask Bruno why he came so late, but when the person looks at the nearby clocks, the person will find out that it’s actually 2 o'clock. How can this be?

However, things change completely when Bruno enters the battle with the loupe on as a Portal Master. His clock distorts time at will to be fair to everyone, making it advantageous for Skylanders! Unfortunately, Bruno can't use this power for himself. In order to use this power on himself, he needs to bring in Bruno at a different time, at a different dimension, but it's a very trouble and a dangerous work.

It is a wonderful ability, but it’s a force that could break the world's order and put himself in danger, so the residents of Skylands implicitly agreed not to borrow Bruno's power by asking him a personal favor. Master Eon also wants to ask Bruno to wind up the time for his beard and grow it out, but he's trying hard not to do it. Of course, Bruno is the only one who doesn’t keep this promise and does whatever he wants. Indeed, who could stop Bruno’s mischievousness?

Bruno uses his skills to help in battle by increasing the turn of Buff Effects. His elemental specialty is Tech. 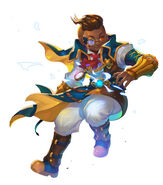