“Give him a big hand. Or two.”
—Villain Vault

Bruiser Cruiser is a troll who is one of the playable Tech villains in Skylanders: Trap Team. This former troll-boxing champion has a wicked one-two punch... and a very large mech suit that mimics his every move.

Bruiser Cruiser's theme is Check My Crib, from APM Music. 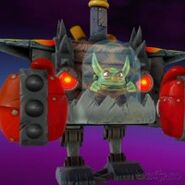 Evolved Bruiser Cruiser
Add a photo to this gallery

Retrieved from "https://skylanders.fandom.com/wiki/Bruiser_Cruiser_(villain)?oldid=125674"
Community content is available under CC-BY-SA unless otherwise noted.