Brock is a large Goliath Drow in Skylanders: Giants. After being defeated by the Skylanders, he offers them arena challenges.

Brock was one of the Drow minions enlisted by Kaos in his attempt to gain the Air fragment to the Mask of Power before the Skylanders do. After the previous Drow captain was thrown overboard for his wild flying, Kaos appointed Brock as the new captain of the Drow zeppelin they were sailing on. The evil Goliath Drow later assisted the evil Portal Master in battling against the Cyclops Queen's army and tying up the female monarch.

When the Land Whale, which was assumed to be the Air segment, was thrown away by Lightning Rod, Brock went with Kaos to go after it. It was later mentioned that half of Kaos's Drow soldiers were eaten by the Land Whale as a result, but Brock was among the ones who survived.

Brock was enlisted by Kaos once again to assist Hurrikazam in guiding the kidnapped undead inhabitants into the Undead Energy Extractor where they were drained of their Undeadliness for Kaos to use for his sinister plans. When they discovered that the Skylanders have infiltrated Hurrikazam's Cloud Citadel, the Drow including Brock attempted to stop them, but were swiftly defeated.

After Kaos was driven away, Brock traveled back to Ghost Town and apologized for his actions. The Goliath Drow wondered on where he would to go next, but a grateful Hurrikazam offered to take Brock to Rumbletown where the villagers love a good scrap and where there were a lot of pie shops for Brock to enjoy.

Brock kidnapped Ermit to lure the Skylander into Rumbletown's battle arena to entertain a Cyclops audience. After being defeated, he joined them on the Dread-Yacht, offering Arena Challenges in his Club. He offered the Skylander entry into three arenas, each having seven unique, unlockable challenges to complete. Completing a challenge rewards gold to the Skylander or, in the case of each arena's final challenge, an even greater reward. 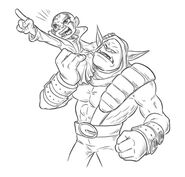