Broccoli Guy is a living broccoli who is one of the trappable villains in Skylanders: Trap Team. In Chompy Mountain, he is placed in charge of the Chompy Hatchery despite his claims of being framed, possessing a powerful spell to heal his Slobber Trap allies. The Skylanders soon arrive and defeat the Slobber Traps and Broccoli Guy, trapping him.

In Skylanders: Imaginators, though not becoming a Sensei, Broccoli Guy returns to start working with Chill Bill as a Troll Radio host, giving up on a life of crime and imprisonment in Cloudcracker Prison. Part of the job includes commentating on arena battles.

In Skylanders: Battlecast, despite his insistence to having never worked for the Doom Raiders, he now works for the Chompy Mage, having the ability to summon broccoli minions and many ways of healing his team even when defeated, including a magical Green Thumb. 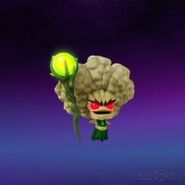 Broccoli Guy in the Ring of Heroes, with a permanently evolved appearance if his element is Water.