Brawlrus is a walrus pirate and one of the trappable Tech villains in Skylanders: Trap Team. He is among the group of pirates that took over Rainfish Riviera and confronted with the Skylanders with a group of Pirate Henchmen, but was overpowered and defeated.

Brawlrus and Brawl & Chain were recruited by Blubberbeard in his latest scheme to take over Skylands by flooding the lands using his underwater factory. They crossed paths with Dive-Clops and eventually his brother Eye-Brawl in the submarine only to be outwitted and apprehended by the Skylanders along with Blubberbeard.

Brawlrus' theme is Walk the Plank, from APM Music. 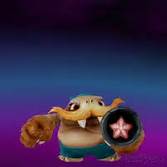