“No chains, No pain!”
—Villain Vault

Brawl & Chain is a walrus who is one of the Water villains in Skylanders: Trap Team. He confronted the Skylanders on a flying ship with a group of Bomb Shells and Pirate Henchmen, but was defeated and trapped.

Brawl & Chain can latch onto enemies with his hook and reel them in towards them. He can also spin around with his hooks, damaging his opponents.

Brawl & Chain and Brawlrus were recruited by Blubberbeard in his latest scheme to take over Skylands by flooding the lands using his underwater factory. They crossed paths with Dive-Clops and eventually Eye-Brawl in the submarine only to be outwitted and apprehended by the Skylanders along with Blubberbeard.

Brawl and Chain's theme is Prepare to be Boarded, from APM Music. 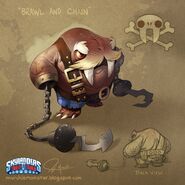 Retrieved from "https://skylanders.fandom.com/wiki/Brawl_%26_Chain_(villain)?oldid=124638"
Community content is available under CC-BY-SA unless otherwise noted.