Brain is a one-eyed brain creature who claims to be the last of the Ancients in Skylanders: Imaginators. He commonly calls himself "the smartest, most powerful brain in the known universe".

Brain is highly egotistical, regarding himself highly and smarter than anyone else. He believes mind control is "the thinking brain's form of tyranny". Although presented in a villainous light by siding with Kaos to mind control all of Skylands, Brain's true admiration is those with a high level of imagination, which is what lead him to switch sides and help the Skylanders, due to Kaos's obnoxious stupidity and lack of "brain juice".

Brain does have a sense of gratitude despite his ego, as he helped Kaos to repay for his newfound freedom from a jar. When he did decide to help the Skylanders, however, he showed a fear of punishment, as he vowed to help them as to avoid the consequences of his crimes and to prove his new loyalty for not being imprisoned yet again. He is deeply sensitive about his lack of thumbs.

Brain is a very powerful user of Mind Magic, being able to warp reality with his and other people's thoughts, and possess others with weaker minds. Because of his powers over the mind, he has a great range of other abilities, from projecting inpenetrable forcefields, granting powers and knowledge, mind reading, creating objects out of thin air, creating Doomlanders, to shapeshifting, and mind-control that can span the entire realm if combined with another user of Mind Magic. Brain also appears to be immortal or immune to aging, having been sealed away for thousands of years; and can combine his powers with the player to greatly boost Imaginators. He also can sense evil in the M.A.P. from long distances.

Long ago, Brain and the other Ancients created everything in Skylands using Mind Magic, however, they didn't agree with his so-called "antidisestablishmentarianism" and were at odds. Eventually, he stood up against his fellow Ancients and began using Mind Magic to brainwash all of Skylands, transforming the inhabitants into mindless servants. His plan was thwarted by the magic of Dragons, who were immune to mind control, and the remaining Ancients were able to lock away Brain in a jar as punishment for thousands of years.

When Kaos acquired the Everlasting Thinking Cap, he came into contact with Brain, who granted Kaos's request in creating the most powerful Doomlander: the Guacamole Monster. When it failed to stop the Skylanders, Brain possessed Kaos's bird to speak with Kaos personally and assist him in creating more powerful Doomlanders. Eventually Kaos started to become furious with Brain due to the failures of his Doomlanders, while his new ally stated that the reason for his failure was due Mind Magic requiring lots of "brain juice", which Kaos lacks, but if they were to combine their Mind Magic, that they would be able to do anything. After using Glumshanks as an unwitting test subject by giving him another head, Brain instructed Kaos to find him at The Golden Arcade where the Ancient's jar prison was locked inside the Arcade's prized vault.

The Skylanders unwittingly undid the locks that held Brain's prison in an attempt to stop Kaos from reaching it, allowing him to escape while still on his jar. Brain went off to find Kaos almost immediately and the two villains combined their Mind Magic to unleash a wave of mind control to sweep across Skylands, turning nearly everyone, including the Skylanders, into brainless zombies. Remodeling their lair with their powers and creating an impenetrable forcefield around it, they nearly won, but even before the Skylanders reacted, they had started to argue.

After undoing most of the brainwashing spell with the help of the dragons of Dragon Temple, the Skylanders tried to fool Kaos with a giant birthday cake where they hid in, but Brain and Glumshanks saw through the plan immediately. Obsessed with acceptance, however, Kaos let them in anyway, allowing the Skylanders to storm his lair through his Klones and his newly created game show. When they finally reached Brain and Kaos, they took the opportunity to argue over the latter's poor plans, though Brain gave in anyway and transformed Kaos into his super form, and helped him create Doomlanders to fight with him. The arguing continued through the battle as Kaos's new form did nothing to stop the Skylanders, until Brain was fed up with the insults and joined them instead, giving them an enormous upper hand with his and the Portal Master's combined Mind Magic, earning the heroes an easy victory.

After the battle, however, Brain imprisoned Kaos in a force field and tried to escape, until Spyro and the other veteran Skylanders stopped him with threats. Desperate to avoid punishment, the sentient brain offered his services in scouring out evil, shrinking Kaos and Glumshanks to a tiny size and trapping them inside a jar to prove his new loyalty. Declaring himself the new professor of Skylanders Academy and telling the Skylanders a story offscreen, he then served as the mission giver for the post-game, randomly unlocking Missions or special Arena Battles with Imaginite Chest rewards.

An enormous Brain meeting with Kaos for the first time. 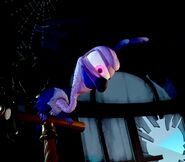