Bouncer is a Tech Skylander and one of the eight Giants in Skylanders: Giants. He also has a Legendary counterpart called Legendary Bouncer.

While still an All-Star Roboto-Ball player, Bouncer had a big, lively personality that helped popularized the sport. Even after he no longer plays the sport of Roboto-Ball, he still holds a sense of loyalty to his Mabu fanbase, who remembered the security-bot fondly from his playing days, and Bouncer became determined to defeat the Arkeyan King, not wanting to let his fans down when they were enslaved by the Arkeyans. Despite his dynamic personality, Bouncer holds little patience to those who are extremely arrogant and little regard to what's at hand, but keeps himself from getting too upset since he considers himself a jolly robot.[1]

Long ago, Bouncer was an All-Star Roboto-Ball player. But when the Arkeyan Empire destroyed his home town and discontinued the games, he was converted into a security-bot and stationed in the mines. It was there that Bouncer encountered dozens of Mabu prisoners who remembered him fondly from his playing days. He quickly became a bit of a celebrity around the mines, and it wasn't long before this new adulation convinced him that he could be just as much of a hero in life as he was on the field. Thus, he decided to join the Skylanders and take a stand against the evil, Arkeyan overlords.

Back in the day, Bouncer was an All-Star Roboto-Ball player, amazing his Mabu fans with his speed, accuracy and lively personality. His trick shots were famed across all of Skylands. His games were watched by thousands. Then the Arkeyans had to go and spoil everything by destroying his home town and outlawing Roboto-Ball. His fans were enslaved and sent to work in the mines. Bouncer was converted into a security robot and sent to the mines to make sure the Mabu didn't try any funny stuff. Down there in the dark, Bouncer met many Mabu who remembered his glory days on the field. Their sense of loyalty touched the hulking robot, and instead of doing the Arkeyans' dirty work, he decided to fight against them. Cheered on by his army of fans, Bouncer used his Roboto-Balls skills to free the slaves, then joined with the other Giants in the war against the Arkeyan King.[2]

Bouncer was the most vocal about Blades when the young dragon's cocky and rebellious nature was threatening to ruin the mission of destroying the Machine Magus. He, Trigger Happy and Night Shift all shared doubts and concerns about Blades during a large portion of the mission until the dragon ran off to face Magus on his own. Frustrated by Blades' behavior, Bouncer considered 'shaking the scales right off' him, but was reassured by Night Shift that Blades would learn his lesson the hard way on his own. Bouncer, Night Shift and Trigger Happy came to Blades' rescue when the dragon had been overpowered by Magus and his defenses. Together as a team, the Skylanders defeated the Drow leader. Afterwards, Blades apologized for his actions and hoped to learn what it meant to be a Skylander. This earned Bouncer's respect, who then convinced Blades to keep his Legendary status as the dragon is now officially part of the Skylander's team.

When Malefor was on his way to attack the Skylanders Academy, Bouncer, the Giants and other Skylanders were summoned to stop the evil dragon. The Giants managed to grab hold of the Malefor's tail to hold him down and allow their comrades to attack him all at once, but were caught off guard when the mechanical tail was also made as a weapon, allowing Malefor to knock the other Giants off-balance. Before the Skylanders can scatter, Malefor defeated them and the Giants with a single whip of his powerful tail. This allowed Malefor to absorb their powers with a crystal to make himself more powerful. Once the crystal was destroyed by Spyro, Bouncer and the other Skylanders were granted back their strength and powers.

In response to the sky rifts appearing around Skylands, Bouncer and the other Giants were assigned to directly protect the Core of Light stationed at the Skylanders Academy in case of a direct assault. Bouncer expressed his fears and worries regarding the sky rifts that were threatening Skylands, but was calmed by Tree Rex. When Kaos captured Master Eon and demanded the Skylanders to surrender the Core of Light, Spyro sent out the Giants, who proceeded to break apart the whole island, hurling the rocky remains at the attacking airships.

Bouncer's attacks include finger pistols, in which he shoots out some tiny bouncy balls, shoulder mounted cannons with which he fires powerful (and slow) missiles with a targeting computer, and can't move leaving him open to attack; and finally, I-Beam, where he shoots strong lasers from his eyes for close range combat, but it can overheat if used too long and it lowers his speed when using it.

Bouncer can fire off more rockets for greater damage.
Provides Bouncer with upgrades for his I-Beam and Fingerguns.

Gain a 20% None bonus while in the Radiant Isles. The scroll for this upgrade can be found in None. 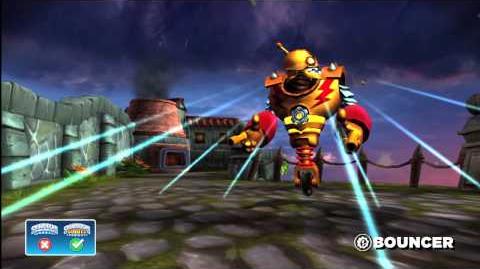 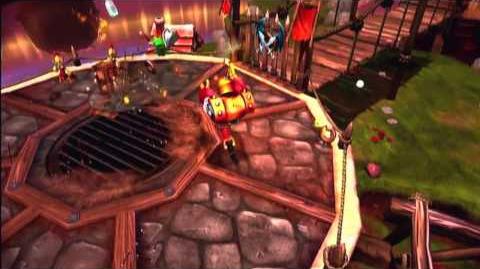