Boomer is a green troll Skylander in Skylanders: Spyro's Adventure. He is of the Tech element, and is notable for being the only troll to have the honor of being a Skylander. He also has a St. Patrick's Day counterpart called Lucky Boomer, who is available only on Skylanders: Lost Islands.

Boomer was originally called Bomb Troll, and at first planned to be a grumpy old troll. That concept evolved quite a bit into what ultimately became Boomer. He went through at least five prototypes en route to his final and decidedly un-grumpy personality.[1]

Boomer's moveset is straight forward in lobbing explosives and knocking enemies away from him with his Troll Smash ability. The Dynamite Fuse Fake-Out move which delayed primary attack projectile explosions so long as the primary attack button was held was a very fun ability to use in PvP for the team, but as years of development have taught Nat Loh, moves that involve holding a button down frequently are not understood by players. Troll Bombs and all of their subsequent upgrades were direct homage to Super Bomberman which the Toys For Bob designers used to frequently play and Boomer's Accident Waiting to Happen upgrade was influenced by the Banana Bomb in Worms by Team 17.[2]

Blowing things up is apparently Boomer's answer to everything. He is also known for his love of blowing stuff up; a trait that is shared by all the other Trolls in Skylands. However unlike his brethren, Boomer isn't interested in war and conquest, so he turned his back on the troll lifestyle. He is considered a little odd; if at a great but dangerous height, Boomer enjoys every minute of falling or barreling down towards the ground at a frightening pace, since the resulting crash will make a huge 'boom'. Yet for being a troll he is disgusted by the sight of trolls.

Boomer is bursting with manic energy, but is kind through and through. No wonder his troll mother never understood him.[3]

As a young troll, Boomer loved to blow things up -- particularly sheep. Later, he was drafted into the troll army, where they gave him LOTS of things to blow up. However, Boomer soon realized the sole mission of the army was war and conquest. Even though he was a troll, these things didn't interest him. So he left the trolls after saving a town from being destroyed by them. Not long after, he was invited to be a Skylander -- the only troll ever to win such an honor. Now he uses his explosive skills to fight evil... much to the relief of sheep everywhere.

As a young troll, Boomer liked nothing better than big bangs and blowing things up. His favorite target of all was sheep, which he loved to blast sky-high. So it was only natural that when he grew up he became an explosives expert in the troll army. But although the army delighted in Boomer's detonations, he soon felt something was wrong. The army was actually seemed to take all this war seriously. So Boomer scamped merrily to find some sheep instead. The Troll General erupted with anger when he heard that Boomer was gone. He needed his demolitions expert to blow up a dam and flood the village below. But Boomer had overheard the General's plans and intended to intervene.

So, while his former squad mates destroyed the dam, Boomer began throwing sticks of dynamite at a nearby flock of sheep. The sheep hurtled through the air and into the oncoming torrent of water where their thick wool began to soak it all up. By the time the water reached the first village house, the deluge had become a dribble. When Master Eon heard Boomer had rescued an entire village, he signed him up quick-smart. Now, Boomer's explosive skills are used only to terminate evil (and still occasionally sheep, although he'll deny it if you ask him).[4]

Boomer was one of the Skylanders who was at Gill Grunt's concert on Eon's island in celebration of their latest victory over the forces of darkness. Like most of the Skylanders, Boomer didn't like Gill Grunt's singing, so the troll used dynamite sticks as earplugs to mute it out. Suddenly, Flynn's hot air balloon appeared and was flying down out of control, soaring straight towards Boomer. Unaware of the danger due to his dynamite earplugs, Boomer was saved from the crash by Spyro, although not hearing anything due to the troll still having his earplugs on. While Spyro, Eruptor, and Gill Grunt went to investigate the happenings in the Mabu Market, Boomer was ordered by Eon to stay behind and help fix Flynn's hot air balloon.

He later joined the three Skylanders with Flynn on a quest to find the Chattering Key that is said to unlock a tomb that contains an ancient Arkeyan weapon that Kaos may be seeking. In the Forest of Fear, Boomer falls victim to the Fungus Rings of Despair, and the troll saw his worst fear come to life through hallucinations, being trapped in a doll's tea party (which is the greatest nightmare to any troll brought to life). He was soon freed by Spyro, and Boomer and the other Skylanders continued their way through the Forest. The Skylanders later find the Chattering Key that was being guarded by the statue of a stone wyvern and were able to collect it, thanks to a plan devised by Spyro. But the stone wyvern chased after them in hot pursuit, despite being slowed down by Boomer's dynamites and Gill Grunt's water cannon.

Eventually, as the Skylanders rescued Flynn and struggled to escape the pyramid with Kaos' transport portal, Boomer gained control over The Machine of Doom, stopping Kaos before he could escape. The troll then used the crumbling machine to get out of the collapsing pyramid with the Skylanders and Kaos in tow, resulting in the Machine of Doom breaking apart. Although Kaos escaped, Boomer soon celebrated with his fellow Skylanders in their victory.

Seeing the Core of Light destroyed would have been as hard for Boomer as any Skylander yet. Yet the explosion that followed must have been the best thing this pyrotechnic troll had ever seen. It's a pity he was too busy being banished to have a camera ready![5]

Boomer, Voodood, and Ghost Roaster were Buzz's elite team of Skylanders when they mysteriously disappeared while on a mission at Motleyville and haven't returned for months. SuperChargers, Spitfire, Stormblade and Nightfall, were assigned to find the lost Skylanders at their last known location. Upon getting ambushed by Spell Punks lead by Spellslamzer, the SuperChargers were suddenly defeated and knocked unconscious by Boomer, Voodood, and Ghost Roaster, who were now working for Spellslamzer.

With the three SuperChargers imprisoned, Spellslamzer announced his plan to raid the Mabu Radiance mines of its rare and powerful minerals, controlling the crystal supply to become the supreme power in all of Skylands. As Stormblade wondered why Boomer, Ghost Roaster, and Voodood would turn their backs on Skylands and Master Eon, Ghost Roaster revealed that he and the other two Elites grew tired of being tossed aside and forgotten while the Skylanders such as the SuperChargers, SWAP Force and the Giants are more appreciated. The three Elites later caught Spitfire, Stormblade and Nightfall when they attempted to escape and Spellslamzer had the three SuperChargers strapped helplessly to the front of their own vehicles as the evil Spell Punk and his army ride out towards the Mabu mines.

Gain a 20% Damage bonus while in the Radiant Isles. The scroll for this upgrade can be found in Whipwind Mountains. 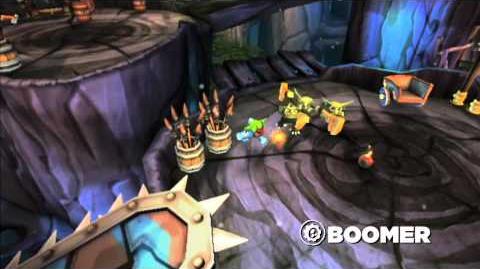 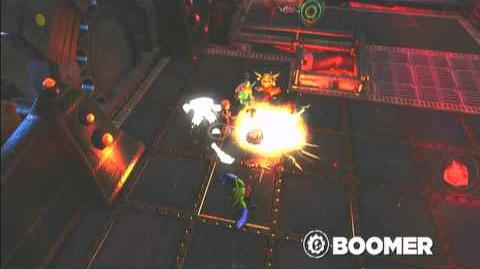 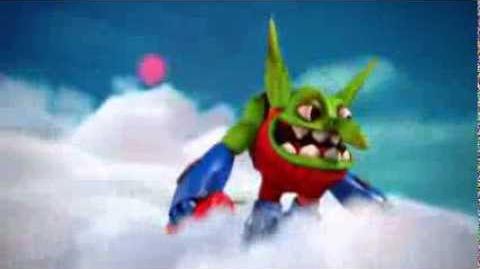