None
The Boom Brothers is a two-headed robot in Terrafin Battles the Boom Brothers who specialized in explosions. They serve as one of the main antagonists of the story working with Kaos.

The Boom Brothers soon recovered from the attack and held Hot Dog hostage, threatening the Skylanders to surrender with a pineapple grenade. Terrafin pretended to surrender to the Boom Brothers, tricking them into arguing with one another until one of the brothers forced the pineapple grenade down his sibling's throat, causing them both to explode. 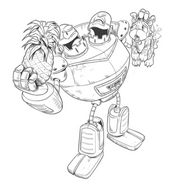 Retrieved from "https://skylanders.fandom.com/wiki/Boom_Brothers?oldid=114402"
Community content is available under CC-BY-SA unless otherwise noted.