Boom Bloom is a mutant plant who is the Life Sensei of the Ninja Battle Class in Skylanders: Imaginators. She is avaliable in the Enchanted Elven Forest Adventure Pack, and is the main character of the fourth Skylanders: Ring of Heroes Episode Dungeon, The Flower that Bloomed From Scrap.

Boom Bloom is soft spoken and polite, rarely using contractions. Despite this, she's headstrong and insensitive, making rash decisions without much thought and is easily confused and embarassed. She still retains her memories of when she was a living tree, as well as the feelings of the ones that used to be with her.

Boom Bloom was created in the laboratory of a mad scientist! After using his mutation goo to change deadwood into evil creatures, Dr. Krankcase began experimenting with live plants! But it had a much different effect. Instead of becoming subservient villains, the mutated plants instantly rebelled against their creator and tried to destroy his goo factory. Dr. Krankcase and his henchmen were able to thwart all of these insurgent plants, except for one - Boom Bloom! Her mutation gave her extraordinary Ninja skills and a thorny whip, which she used to unleash a flurry of martial arts moves that forced Dr. Krankcase to flee his own factory and vow never to experiment on plants again. Now as a Sensei of the Ninja class, she uses her incredible abilities to teach new Skylanders how to protect nature... and unleash its fury!

The Episode Dungeon expands on her origins. As soon as Boom Bloom was reformed into her current appearance, she escaped with Tree Rex and Grilla Drilla out of the Abandoned Factory, vowing to enact revenge on Dr. Krankcase. However, not knowing how to communicate with the Skylanders and eagerly trying to get them to take her to Master Eon so she would become one too, they left her behind out of suspicion. Boom Bloom tried to infiltrate the factory again and she was quickly captured by the doctor when she tried to take on him alone. Though Dr. Krankcase attempted to turn Boom Bloom into the leader of his mutant army, Tree Rex and Grilla Drilla soon caught up to her in their Awakened Forms, and helped her fight back. With Krankcase defeated, they revealed that Master Eon helped them get back in, and he was observing the battle to judge the Boom Bloom's intentions.

A long time later, now a Skylander and a teacher at Skylanders Academy, Boom Bloom heard of the exploits of the Earth Portal Master exploring the Shattered Islands, and asked Master Eon to help her get introduced and lend a hand. 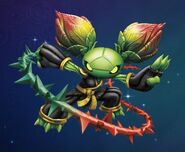 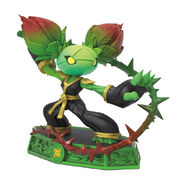 Boom Bloom's toy figure.
Add a photo to this gallery

Retrieved from "https://skylanders.fandom.com/wiki/Boom_Bloom?oldid=116127"
Community content is available under CC-BY-SA unless otherwise noted.