Compared to her normal counterpart, Bone Bash Roller Brawl is much more aggressive and technical in her play style. Now with SuperCharged abilities, Roller Brawl can slash and punch enemies into submission! She can also throw her Fang Blades out at enemies that will eventually return to her. When she is holding onto her Fang Blades, her attacks are slow but powerful; when she is not holding onto them, her attacks light but quick. She can also skate forward a short distance and ram her opponents, and even blow a kiss that saps health from enemies.

In Skylanders: SuperChargers Racing, Bone Bash Roller Brawl is notable for being one of the better all-around drivers. While she doesn't have any superior stats, both her Top Speed and Handling are great; to back this up, she also has really good Acceleration. Her combat skills aren't as grand, as both her Firepower and Armour are simply good by comparison. Regardless, she is still one of the better race oriented drivers.

As a SuperCharger, Bone Bash Roller Brawl has access to the vehicle mods. When paired with her Tomb Buggy, she gains a tremendous boost to her Acceleration. Her Handling and Firepower also receive relatively good boosts also, while her Top Speed and Armour only get a minor boost.

As an AI racer, she uses the Stealth Stinger equipped with the Pedal Pattles for sky races, the SubStream Jets equipped Dive Bomber for sea races, and her Tomb Buggy with SuperCharged mods for land races.

Keep the enemy on their toes with aggressive upgrades that favor mobility!
Become the star of the show and bewilder enemies with magnificent performances! 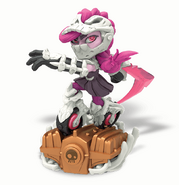 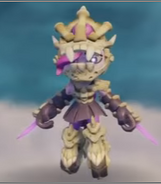 Retrieved from "https://skylanders.fandom.com/wiki/Bone_Bash_Roller_Brawl?oldid=114946"
Community content is available under CC-BY-SA unless otherwise noted.