“Did you hear the one about the tortoise and the bomb?”
—Villain Vault

This Bomb Shell is one of the trappable Magic villains in Skylanders: Trap Team. He was encountered on the Chef Zeppelin, leading the Skylanders on a chase across the deck. Bomb Shell was finally cornered near the back of the deck, where he was taken down and trapped.

As a trapped villain, Bomb Shell throws single bombs that explode and do area damage as his main attack. His secondary attack causes him to spin forward quickly while entering his shell, damaging enemies in the way.

During his boss fight, he throw bombs that release magical purple fire in the area for continuous damage. When hit enough times, he can be flipped over, making him unable to attack until he recovers.

In Skylanders: Battlecast, he's regarded as a highly unpredictable enemy, and can attack any enemy randomly. 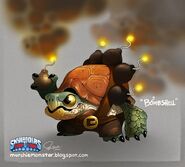 Retrieved from "https://skylanders.fandom.com/wiki/Bomb_Shell_(villain)?oldid=115997"
Community content is available under CC-BY-SA unless otherwise noted.