Blastermind is a Magic Trap Master who appeared in Skylanders: Trap Team.

Blastermind is very attuned to the feelings of others and tries hard to help his friends with their problems whenever he can.[1]

Blastermind was once the "hide and sheep" champion of the Sardonic Mountains, where he and his friends played regularly. But when he was about to set a new Skylands record, the ground collapsed and Blastermind fell into a deep, mysterious cavern filled with shimmering crystals. As his friends circled the hole up top, they suddenly found themselves face to face with a dangerous Ham Dragon, who had felt the rumble of the collapse. Down below, Blastermind felt helpless. But fortunately, the cavern was filled with Psionic Power Crystals once used by the Ancients to amplify their thoughts. When the crystals "heard" Blastermind’s worried thoughts about saving his friends, they found him worthy – and bestowed upon him awesome psionic powers, which he used to get out of the hole and mentally blast the circling Ham Dragon. Soon after, Blastermind joined the Skylanders as part of the Trap Team, using his new Traptanium Psionic Helmet to fight evil everywhere!

The Psionic Power Crystals had granted Blastermind incredible Psychic powers, such as levitating himself, as well as creating powerful blasts of brainwaves. He also has telekinesis to levitate and smash his foes against the ground, as well as shoot energy spheres that slow down his foes. His Soul Gem allows him to use his psychic powers to solve Lock puzzles.

Skylanders Power Play Blastermind
Add a photo to this gallery 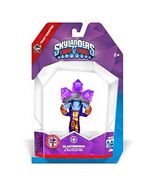 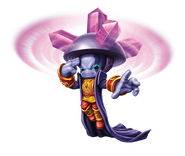 Blastermind Transparent Render
Add a photo to this gallery

Retrieved from "https://skylanders.fandom.com/wiki/Blastermind?oldid=117376"
Community content is available under CC-BY-SA unless otherwise noted.