The Future of Skylands

“From the future. This means lasers.”
—Villain Vault

Blaster-Tron is a futuristic robot who is one of the Light trappable villains in Skylanders: Trap Team. He later returns as a Sensei of the Knight Battle Class in Skylanders: Imaginators.

As the Skylanders were fighting through The Future of Skylands, Blaster-Tron attacked them with the help of four Brawlruses after they smashed a cluster of Traptanium. He was eventually shut down and trapped.

After his capture, the heroes took him and Tae Kwon Crow to The Golden Desert for their Villain Quests, but not without fighting the Golden Queen's guards along the way. His quest was called "Help Diggs Dig", where Diggs himself explained to the Skylanders that there was some treasure buried under the sand, and needed Blaster-Tron's magnetic abilities to unveil it, probably because the Molekin didn't have a shovel and is completely blind anyway. After completing the quest, he was awarded with coins, Diggs' thanks, and a new outfit.

Blaster-Tron isn't just state-of-the-art technology, he literally is from the future. When the Skylanders traveled forward in time to stop Wolfgang, they ended up bringing back the renegade robot with hopes that they could learn from his advanced circuitry. Eon immediately noticed that he had an actual "Good/Evil" switch that had been set to Evil. After flipping it to Good, Blaster-Tron was completely transformed. Besides going from bad robot to good robot, he ditched his blaster gun in exchange for a laser sword. No one knew exactly why, but as long as he was helping out the cause of justice, the Skylanders were happy. As a bonus, Master Eon noticed that his skill with the blade was second to none, and so he made Blaster-Tron a Sensei for the Knight Class, where he now gives 110% to training his students - which is technically possible because in the future, we figure out how to give more than 100%

Blaster-Tron can fire a blast of energy at enemies that comes within range. He also has a rocket pack that allows him to fly forward in the direction he is facing.

In Imaginators, his sword has taken the role of his gun, firing lasers and summoning various high tech attacks depending on how much it is charged. He also gained greater control of his rocket pack for more movement, and can now fire slow-moving rockets with electric tethers and force field bombs.

In Imaginators, Blaster-Tron has a different theme called Not Acceptable by KPM.

Blaster-Tron in The Future of Skylands.
Add a photo to this gallery 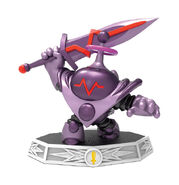 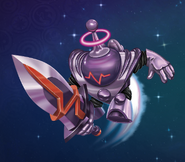 Retrieved from "https://skylanders.fandom.com/wiki/Blaster-Tron_(character)?oldid=117393"
Community content is available under CC-BY-SA unless otherwise noted.