Blades is a brave and noble dragon despite his young age. He is willing to do whatever it takes to protect others from harm. Even if it means sacrificing himself to do it![1] However like most youngsters, Blades can be a headache. In I Am Legendary, while still attending the Skylanders Academy, he was cocky, reckless and full of himself, convinced that he didn't need anyone's help. He would call elder and experienced Skylanders 'old timers' and 'slow'. This trait diminished when he realized that working in a team was more effective than handling bad guys on his own.

Blades came from a long line of dragons that guarded the dungeon of Scalos Castle, where the Golden Fear Serpent had slumbered for a century. Although it was considered an honor, Blades dreamed of becoming a knight so he could go on adventures in faraway lands. But one evening, a deafening roar shook the castle and a wave of fear swept over. The serpent had awoken! Fighting his fear with each step, Blades descended into the chamber. As he entered, the golden beast grinned and made Blades an offer - he would leave the kingdom unharmed and slumber for another hundred years, as long as Blades agreed to remain in the dungeon for eternity. Knowing the safety of the kingdom was more important than his ambition, Blades accepted the offer. Then suddenly, the fear was gone and the serpent vanished - for it turned out the only way to defeat the serpent was to confront his fear. News of this bravery soon found its way to Master Eon, who came to see Blades at once and made him a Skylander.

As guardian of the Scalos Castle dungeon, Blades faithfully stood watch over the Golden Fear Serpent like his ancestors before him. The young dragon felt honored to have such a responsibility, but he longed to become a knight so he could travel to faraway lands and embark on adventures. But after one hundred years of peaceful slumber, the serpent roared back to life, unleashing a wave of fear upon the castle. Blades fought back his fear and confronted the golden serpent in the chamber where the beast laid. The Golden Fear Serpent made an offer to Blades that he would leave the kingdom alone and sleep for another hundred years if Blades agreed to switch places with him, dooming the dragon to remain in the dungeon forever. Blades agreed to switch places with the serpent in order to protect Scalos Castle, conquering his fears and causing the serpent to vanish as a result. That brave act earned him membership in the Skylanders.

Blades was a student still learning at the Skylanders Academy. During his training, he was able to achieve his Legendary status, becoming the youngest Skylander to ever gain it. When he was assigned by Master Eon to a mission with Night Shift, Trigger Happy, and Bouncer, Blades proved to be a handful. Instead of waiting for his fellow Skylanders, Blades charged ahead and took down the leader of a group of Drow without getting information on the Machine Magus, which threatened all of Skylands. Night Shift and Bouncer scolded Blades for his actions and tried to explain to the young dragon about the value of being in a team. However, Blades shrugged off their words and claimed that he didn't need anyone's help.

To prove that he was the greatest Legendary Skylander ever, Blades went on to take down the Machine Magus by himself, leaving Night Shift, Trigger Happy and Bouncer behind. Upon arrival, the young dragon managed to defeat a group of Drow Spearmen guards outside the stronghold, but was confronted by Magus, who used his machine, the Omni-Disruptor, to block Blades' connection to Portals. Without this connection, Blades was unable to call for help and summon his Legendary armor. He was quickly overwhelmed by the Omni-Disruptor's defenses, until Trigger Happy, Night Shift, and Bouncer arrived. Together as a team, with Blades included, they destroyed the Omni-Disruptor. With the machine in pieces, the Skylanders were able to summon their Legendary armor and ultimately defeat Magus and his Drow.

After apprehending Magus and his group, Blades apologized to his friends for being a jerk throughout the mission. The young dragon proclaimed that he would surrender his Legendary status and hope to earn it back someday by proving that he can be part of a Skylander team. Bouncer was pleased that Blades learned his lesson, and encouraged the young Skylander to keep his Legendary status as he officially became part of the Skylander team.

Return of the Dragon KingEdit

When Malefor was preparing to attack the Skylanders Academy, Blades was one of the many Skylanders who were summoned to stop him. The dragon knight lead the flying Dragon Skylanders on an assault to attack Malefor's eyes, but they were all swiftly struck down by the evil dragon's firebreath. Despite having an advantage over Malefor, Blades and the other Skylanders were unprepared for the abilities Malefor's armor held and were ultimately defeated with a single tail strike. Malefor then proceeded to absorb the powers of Blades and the other Skylanders with a crystal to empower himself. When Spyro destroyed Malefor's crystal, the powers of the Skylanders he stole, including Blades', were returned to their rightful owners.

Wearing bladed armor, Blades is literally sharp everywhere on him, making it difficult for enemies to dodge his strikes. He can swipe and slash enemies with his bladed wings and tail, and even release a string of Blade Shards. Blades can also summon whirlwinds that can carry his Blade Shards to make them fly into his opponents for additional damage.

Skylanders Power Play Blades
Add a photo to this gallery 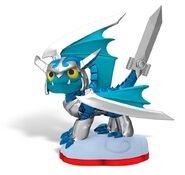 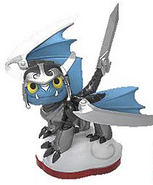 Blades as seen in the mini story comic Mister Roboto

Retrieved from "https://skylanders.fandom.com/wiki/Blades?oldid=115915"
Community content is available under CC-BY-SA unless otherwise noted.