Blackout is a black dragon who is the Dark core Skylander in Skylanders: Trap Team.

Despite knowing of his sinister origins, Blackout shows bravery, compassion, and encouragement towards others. Like all Skylanders of his element, Blackout sees no relation between the Dark element and The Darkness.

Blackout hails from the Realm of Dreams, where the collective imagination of all the creatures in the universe come together to create beautiful wonders... and terrible nightmares. At a young age, he was recruited into the Dark Stygian – a Dragon Clan whose chief responsibility was to create nightmares for evil creatures as a way to discourage them from doing more villainy. But the clan began to abuse their power, and soon spread nightmares far and wide for its own amusement. But Blackout would not stand for it. So he learned to teleport directly into the nightmares the clan created and fought the creatures within. Eventually, the nightmares reached as far as Master Eon, who witnessed Blackout’s courage within his own dreams. After helping him put a stop to the Dark Stygian, Eon then made Blackout a Skylander, serving as the protector of the Realm of Dreams and beyond!

Originating from the Realm of Dreams, a young Blackout was drafted into a dragon clan called the Dark Stygian, whose main goal was to conjure nightmares specifically for evildoers to dishearten them from committing more evil deeds. However the clan began to misuse their power by spreading nightmares far and wide for the fun of it. Not tolerating such abuse, Blackout used his teleportation abilities to dive right into the nightmares and battled the creatures residing inside. One of his battles was witnessed by Master Eon himself when the Portal Master was eventually threatened by these bad dreams. Both Blackout and Eon soon stopped the Dark Stygian, and Blackout was made a Skylander on the spot.

After eating a piece of candy and being unconscious for an unknown amount of time, Blackout and Spotlight found themselves inside a strange place with an opening at the top. However, before they could do anything, the area started to become flooded with candy, threatening to drown the two Skylanders. Both Spotlight and Blackout were unable to break themselves out on their own, but by combining their Light and Dark powers, the two dragons managed to escape. They discovered that they had been inside a giant piñata with Arkeyan ruins, and quickly flew away to alert Master Eon. From afar, Pain-Yatta announced his plans of a "candy catastrophe" that the Skylanders wouldn't be able to stop in time.

After reporting back to Master Eon at the Skylanders Academy about what happend to them, Spotlight and Blackout soon discovered through Gearshift's report that Pain-Yatta used their Light and Dark powers to create an army of candy warriors to rule Skylands. Upon learning about Pain-Yatta's plan, Master Eon sent Spotlight and Blackout back to the Arkeyan ruins in order to find out any clues about the attack. Once there, the two dragons were ambushed by a horde of candy warriors until Knight Light and Knight Mare came to assist their fellow Skylanders. However they were soon confronted by Pain-Yatta, who released a wave of candy upon the four Light and Dark Skylanders.

Blackout, Spotlight, Knight Light and Knight Mare became imprisoned inside Pain-Yatta's giant pinata to power him and his army of candy warriors during their impending conquest over Skylands. Should they use their powers of Light and Dark to try and escape their prison, they would only make Pain-Yatta and his army stronger. Eventually the Skylanders concocted a plan to overload the pinata with their powers, causing it to explode and allowing the Skylanders to escape. Despite absorbing the Light and Dark energies to empower himself, Pain-Yatta suddenly became sick from taking in too much power and his candy warriors around Skylands dropped to pieces, resulting in Pain-Yatta's defeat. At the Skylanders Academy, Master Eon congratulated the Light and Dark Skylanders for their efforts in saving Skylands once again with their Light and Dark abilities.

Despite Spotlight being in the opposite element, Blackout is in good terms with the light dragon.

Blackout can fire orbs of darkness from his horn and summon black holes with a flick of his wings. Using the powers of the Dark element, he can teleport through his black holes from one to place to another. His wings are elastic, allowing Blackout to stretch his wings and whip them at enemies.

Skylanders Power Play Blackout
Add a photo to this gallery 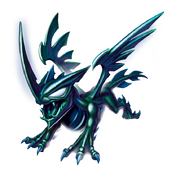 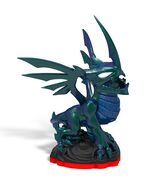 Blackout Trading Card
Add a photo to this gallery 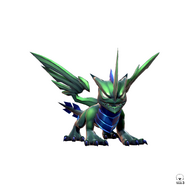 Blackout as he appears in Skylanders: Ring of Heroes 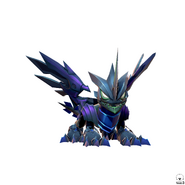 Blackout's Awakened Form in Skylanders: Ring of Heroes
Add a photo to this gallery

Retrieved from "https://skylanders.fandom.com/wiki/Blackout?oldid=119154"
Community content is available under CC-BY-SA unless otherwise noted.