Skylanders
Biting Back is the third comic issue in the Spyro & Friends quarterly comic series. It contains the stories, Spitfire (previously published as Chomped), Biting Back and Mirror, Mirror - part 3 of 3.

Spyro and Roller Brawl skirmish with a Drow battalion and encounter a strange new team of armored enemies with incredible powers! Plus, the madness reaches a conclusion in “Mirror, Mirror” Part 3, as Spyro and Kaos try to reverse their mind-swap![1] 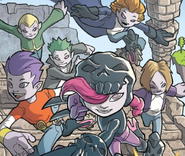 Retrieved from "https://skylanders.fandom.com/wiki/Biting_Back?oldid=121201"
Community content is available under CC-BY-SA unless otherwise noted.