Battle Packs are powerful Magic Items introduced in Skylanders: Giants. They unlock Battle Arenas in the games they were released for, and can also be used as powerful weapons. They are bundled with two Skylanders for use in the arenas. Battle Pack items are powerful and can fire in huge areas, which make them especially useful in Arena Battles. 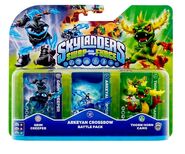 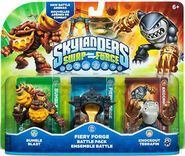 Fiery Forge
Add a photo to this gallery

Retrieved from "https://skylanders.fandom.com/wiki/Battle_Packs?oldid=106502"
Community content is available under CC-BY-SA unless otherwise noted.