“No Rest for the Wicked!”
—Bat Spin's official catchphrase

Bat Spin is a vampire who is one of the Frito-Lay Skylanders for Skylanders: Trap Team.

Bat Spin is one of those Skylanders that Nat Loh designed up front and have the concept art team create a character befitting her powers. He knew he waned a female vampire-type of character and he was really intrigued with the idea of a hero who could use their projectiles after they were fired. Bat Spin's bats would make her other abilities more effective, making this one of Nat's favorite works. Bat Spin's upgrade path would turn out to be so insane (she gained three bat buddies each with a unique ability that made her into an unstoppable force) that Nat used it as a new bar to aspire towards for Skylander upgrades. However this gave him a problem: Skylander upgrade paths should be equally appealing and no one path is the better path so how would Nat make a second path just as compelling as the first? The answer was more bats, and the second upgrade path Nat made topped the first.[1]

Bat Spin was named by Kimberly Josey from Charlotte, North Carolina, as part of a naming contest held by Frito-Lay.[2]

Bat Spin was born in the underworld, which makes her witchy in a good way. She's also pretty cool under pressure and isn't known to fly off the handle.[3] Her mannerisms in idle and win animations imply she might be still young, and strangely she sounds hesitant when given a hat or nickname.

Bat Spin hailed from the underworld, where as a child she was separated from her people. After spending months searching for them, she eventually was welcomed by a colony of magical bats who raised her as one of their own. After many peaceful years living with the bats, the colony was invaded by an army of undead trolls, who were set on stealing their magic to build an ultimate sonar weapon. Bat Spin quickly took action and used powerful abilities that she had learned growing up with the bats and essentially becoming one of them. She heroically defeated the trolls and saved the colony. This caught the attention of Master Eon, who saw at once she would make a worthy Skylander! 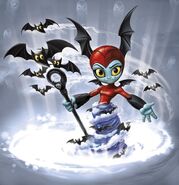 Bat Spin as seen in the game 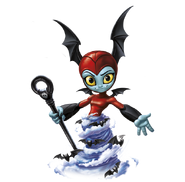 Bat Spin Transparent Render
Add a photo to this gallery

Retrieved from "https://skylanders.fandom.com/wiki/Bat_Spin?oldid=122306"
Community content is available under CC-BY-SA unless otherwise noted.