“A rolling and rollicking barrel of fun.”
—Vehicle Collection

The Barrel Blaster is all geared up and primed for action! Constructed from Donkey Kong's renowned mine cart and iconic barrels, this is one explosive land vehicle that will have Kaos going bananas!

These are the vehicles stats in Skylanders: SuperChargers.

These are the vehicles stats in Skylanders: SuperChargers Racing 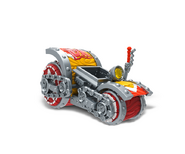 Super Charged Barrel Blaster
Add a photo to this gallery

Retrieved from "https://skylanders.fandom.com/wiki/Barrel_Blaster?oldid=128632"
Community content is available under CC-BY-SA unless otherwise noted.