“Be Afraid Of The Bark!”
—Barkley's official catchphrase

Barkley is one of the four Sidekicks in Skylanders: Giants. He is the miniature version of the Life Giant, Tree Rex. As a Mini Skylander, he is in the Nintendo 3DS Starter Pack of Skylanders: Trap Team along with the Trap Master, Gusto.

Barkley will do anything to protect Skylands from dark magic. Mess with him and you'll be barking up the wrong tree! He loves and respects nature as much as his mentor, Tree Rex.[1] 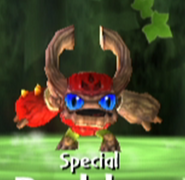 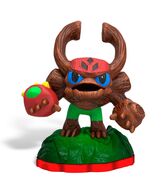 Retrieved from "https://skylanders.fandom.com/wiki/Barkley?oldid=102049"
Community content is available under CC-BY-SA unless otherwise noted.