Astroblast is the Light SuperCharger in Skylanders: SuperChargers. His signature vehicle is the Sun Runner. He has a Legendary counterpart named Legendary Astroblast.

Astroblast is a curious type who won't back down from a fight. He's always prepared to protect people and relics from danger. [2]

While on a secret mission in troll territory, Astroblast crash landed on a remote island where he stumbled upon an ancient relic not seen in thousands of years - a legendary Rift Engine. These magical machines were believed to have the power to travel through the portals between Skylands and other worlds! Shortly after the discovery, an army of trolls appeared on a nearby canyon ridge and quickly charged toward Astroblast. Knowing that the Rift Engine would be very dangerous in the wrong hands, he pulled out his pulse laser and prepared to defend the relic against the incoming horde. After an epic shootout, the trolls fled in defeat. When Astroblast then brought the relic back to his ship, the Sun Runner, it surged with power and a hologram of Master Eon appeared. Eon thanked him for saving the Rift Engine and beckoned him to return it to the Skylander Academy. Astroblast accepted the invitation and was made a Skylander shortly thereafter.

Astroblast can use his special class EZ 9000 laser gun to shoot enemies; the laser blasts bounce off walls and objects. He can also throw out space rocks; when he shoots a space rock, it floats up in the air and fires lasers in a wide area below it before crumbling to pieces. His third attack, gained through the Starsault upgrade, allows Astroblast to kick back enemies that get too close directly in front of him, and he can do this many times with very little delay between each kick. This combination of moves allows Astroblast to deal heavy damage from a distance, concentrate damage on a small area, and quickly knock back enemies that get too close before firing again.

Unfortunately Astroblast is very fragile due to his low health and armor, meaning that players should be careful and take care when playing as him.

In Skylanders: SuperChargers Racing, Astroblast is true to the style of classic Advanced class kart drivers. His Top Speed is maxed out to the highest possible for a driver, his Acceleration is great, yet his Handling is only sub-par. His Firepower may only be decent, and his Armour might be really good, but Astroblast's true strength is his high-speed prowess.

As a SuperCharger, he has access to the vehicle mods. When paired with his Sun Runner, he gains an incredible boost to his Top Speed, which, when combined with the Sun Runner's already high Top Speed, means that this is the fastest Sky Vehicle + Supercharger combination possible. His Acceleration and Handling also receive good boosts while his Firepower and Armour only receive minor boosts.

As an AI racer, he uses the Thump Truck with the Rough Truck Grill mods for land races, the regular Dive Bomber for sea races, and his Sun Runner with SuperCharged mods for sky races.

Gain stronger laser abilities with powered up gear!
Bring down huge rocks from space onto your enemies! 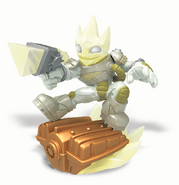 Some concept designs of Astroblast. 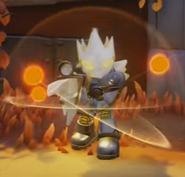 Astroblast summoned in Ring of Heroes.
Add a photo to this gallery

Retrieved from "https://skylanders.fandom.com/wiki/Astroblast?oldid=116983"
Community content is available under CC-BY-SA unless otherwise noted.