Arbo is an Ent who helped the Skylanders discover the Eternal Life Source in Skylanders: Spyro's Adventure.

Arbo possesses the power to grow enormous plants, such as the giant beanstalk that acts as a lift to Treetop Terrace. Arbo can also communicate with non-sentient plants.

Upon being revived, Arbo points the Skylanders towards the Seeds of Life to locate the Eternal Life Source and summoned a beanstalk that takes the player to Treetop Terrace and Falling Forest. After a group of sheep attempted to eat the apples on the Life Trees, Arbo seemingly obtained a dislike of sheep.

After the events of Spyro's Adventure, Arbo taught the future Trap Master, Bushwhack, many secrets of the forest under his tutelage and gifted the tree elf with an enchanted axe. 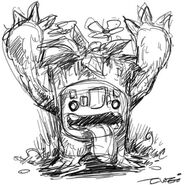 Concept Art of several iterations of Arbo.
Add a photo to this gallery

Retrieved from "https://skylanders.fandom.com/wiki/Arbo?oldid=114423"
Community content is available under CC-BY-SA unless otherwise noted.