The Ancients were mystical beings in the Skylanders series who created everything in Skylands, as well as the Core of Light. It was said that the Ancients "were wise beyond imagination, but lazy beyond measure", a quote from the Book of Paper. The book further notes the Ancients designed amazing technology and built many incredible machines such as the Rift Engines, but long naps often took priority. They claimed the naps were a necessary part of the creative process and that personal hygiene was a mere distraction.

One of the Ancients, Brain, made his appearance in Skylanders: Imaginators.

The benevolent Ancients created everything in Skylands using Mind Magic from their Mysterious Ancient Place as a beautiful floating world with everlasting peace, and in the end, they sealed the power away to prevent it from falling into the wrong hands. However, one of the Ancients stood against his colleagues and began using Mind Magic to brainwash all of Skylands, transforming the inhabitants into mindless minions. Thanks to the magic of Dragons, who were immune to mind control, Brain's control was broken, and his plan was stopped, allowing the good Ancients to imprison their former colleague in a jar, where he would remain for thousands of years.

In their haste to explore new worlds and spread the light of Skylands, the Ancients afterwards created the Dark Rift Engine. This inadvertently released The Darkness, who proceeded to wreck havoc across Skylands with legions of evil. The Skylanders of old held back the minions of The Darkness until the Core of Light, one of the Ancients' creations, was discovered in Ancient's Peak, which successfully repelled the Darkness to the dark corners of Skylands. 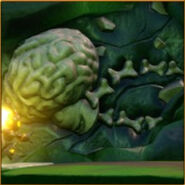 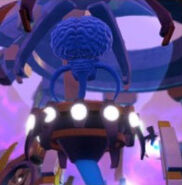 The back of one of the orbs inside the Cradle of Creation. 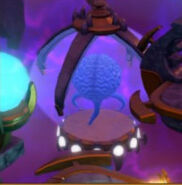 Retrieved from "https://skylanders.fandom.com/wiki/Ancients?oldid=116620"
Community content is available under CC-BY-SA unless otherwise noted.