Ambush is a Life Knight Sensei in Skylanders: Imaginators.

Ambush is direct with his words, and is protective of nature.

There were many mysterious things in the Mystical Bamboo Forest, but none more so than Ambush. The forest was considered to be one of Skylands’ greatest natural wonders, and no outsider, good or bad, was ever permitted to trespass. But that didn’t stop Kaos’ mother! After deciding that the ancient trees would make an exquisite display in her Royal Courtyard, she commanded her army of chainsaw-wielding trolls to chop down the entire forest. This angered Ambush, the mystical tree-knight, who saw the atrocity and swore revenge! Wielding his mythic sword, he fought off the trolls and forced Kaos’ mother into hiding. When Master Eon heard the story, he knew that the mysterious sword master would make the ideal Sensei, and promised to “go green” himself if Ambush would join the Skylander team. Ambush now trains other Knights - and those who are not environmentally conscious cower in fear!

Ambush can hack and slash his enemies with his mythic sword. The sword can cause grass marks to grow on enemies, which will let it deal extra damage on later hits. Ambush can dash across the battlefield while causing bamboo shoots to erupt from behind him, finishing his dash with a shockwave of energy.. He can even summon a field of sharp bamboo trees to erupt around him. His Sky-Chi allows him to focus his energy into a target symbol and mark enemies with it. After they are marked, Ambush dashes across the battlefield at lightning speed while slashing his enemies to deal great damage.

Learn new Whack Attack Combos
Fuse all your attacks into one devastating combo. 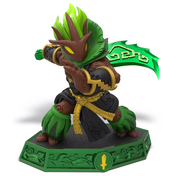 Retrieved from "https://skylanders.fandom.com/wiki/Ambush?oldid=119847"
Community content is available under CC-BY-SA unless otherwise noted.